(CNN)Double-masking, staying at home nearly 24/7 and rarely seeing people beyond his wife are still the way of life for kidney transplant recipient Andrew Linder, even after many in the United States are living like the pandemic has ended.Health officials are recommending third and even fourth shots to boost Covid-19 resistance for people with certain conditions, but that hasn’t eased the fears of some immunocompromised people.Linder, 34, received the life-changing gift of a kidney from his wife, Emily, in September 2019. He will be on immunosuppressants for the rest of his life to keep his body from rejecting the organ.In March 2020, as Covid-19 cases started to shut down workplaces and cities, Emily moved in with her parents for months because she works with the homeless and people in the prison system and did not want to get her husband sick. 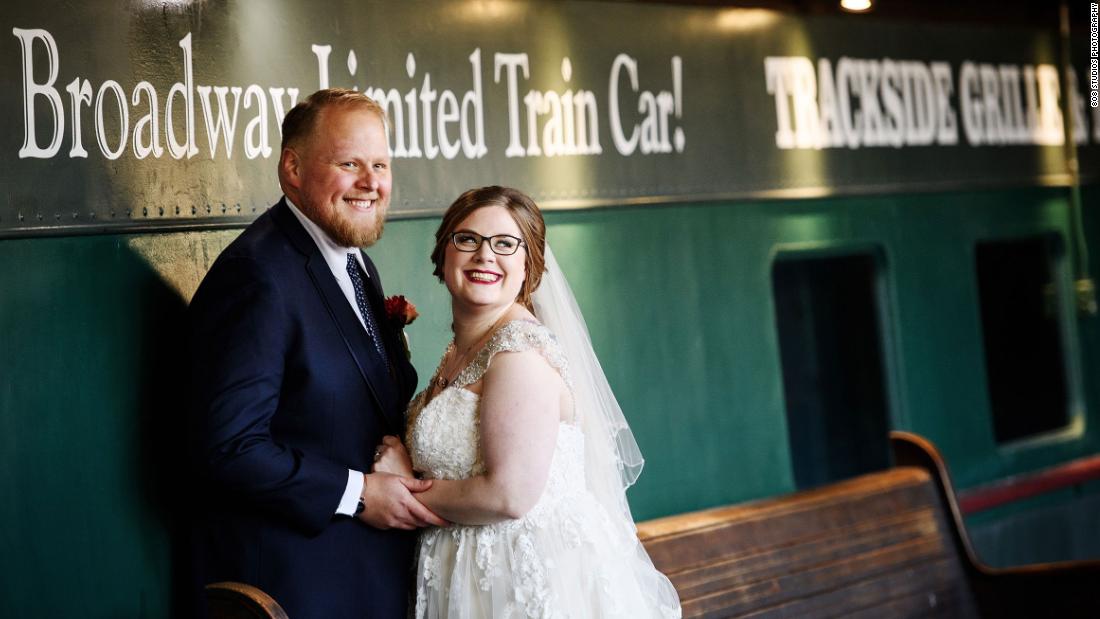 Andrew and Emily Linder got hitched a month before she gave him a kidney.The coronavirus vaccines brought some hope for the Linders, who live in Akron, Ohio. Andrew Linder had two doses of the Pfizer vaccine and later an additional dose and a booster. Hope quickly turned to heartbreak.”I had no antibodies whatsoever. That was shocking and scary and sucky for sure,” Linder told CNN. “I almost feel just as unsafe or if not potentially a little bit more unsafe now than at the beginning of the pandemic, just for the fact that I could get it at this point in time.”

The pandemic isn’t over for many

Linder is one of many moderately to severely immunocompromised people trying to protect themselves as a number of people across the US are going back to some version of their normal lives.The US Centers for Disease Control and Prevention estimates about 9 million people who live in the US, or about 3% of the population, are moderately to severely immunocompromised. That includes people in active treatment for cancers of the blood or for solid tumors, certain organ transplant and stem cell recipients, people with advanced or untreated HIV, and those who take high-dose corticosteroids or other drugs that may suppress their immune system.

The Lancet – Effectiveness of Covid-19 Vaccination Against Risk of Symptomatic Infection, Hospitalization, and Death Up to 9 Months: A Swedish Total-Population Cohort Study

New research out of Sweden has found that post-vaccination “immunity” – if you can even call it that – from Wuhan coronavirus (Covid-19) injections is temporary at best, and completely gone within months.

Interpretation: Vaccine effectiveness against symptomatic Covid-19 infection wanes progressively over time across all subgroups, but at different rate according to type of vaccine, and faster for men and older frail individuals. The effectiveness against severe illness seems to remain high through 9 months, although not for men, older frail individuals, and individuals with comorbidities. This strengthens the evidence-based rationale for administration of a third booster dose.

Lithuania, on the other hand, which currently has the world’s strictest “vaccine passport” scheme, is seeing an all-time high of new “cases” per capita within its population.

Just six weeks after the mandatory jab protocol was put into place in Lithuania, infection rates skyrocketed like never before – far outpacing that of Sweden, which is pretty much covid-free at this point (see the image below for a comparison):

GPA is a fibreglass mesh with metal woven through it that is coated in Geovital’s electrically conductive T98 Alpha shielding paint.

GPA can be applied on walls, ceilings and potentially, flooring:

GPA provides effective shielding against electronic pollution. It can achieve a reduction of over 99% in the amount of high frequency (RF) radiation and reduces low frequency electric fields dramatically (See test report: University of German Armed Forces). As well as being alkali resistant, it has a high tensile strength.

A study conducted by the Department of Paediatrics at the University of Arkansas determined that thimerosal-induced cytotoxicity was associated with the depletion of intracellular glutathione (GSH) in both cell lines. The study outlines how many vaccines have been neurotoxic, especially to the developing brain. Depletion of GSH is commonly associated with autism. Although thimerosal has been removed from most children’s vaccines, it is still present in flu vaccines given to pregnant women, the elderly and to children in developing countries.

US National Library of Medicine
National Institutes of Health – 2005

Abstract
Thimerosol is an antiseptic containing 49.5% ethyl mercury that has been used for years as a preservative in many infant vaccines and in flu vaccines. Environmental methyl mercury has been shown to be highly neurotoxic, especially to the developing brain. Because mercury has a high affinity for thiol (sulfhydryl (-SH)) groups, the thiol-containing antioxidant, glutathione (GSH), provides the major intracellular defense against mercury-induced neurotoxicity. Cultured neuroblastoma cells were found to have lower levels of GSH and increased sensitivity to thimerosol toxicity compared to glioblastoma cells that have higher basal levels of intracellular GSH. Thimerosal-induced cytotoxicity was associated with depletion of intracellular GSH in both cell lines. Pretreatment with 100 microM glutathione ethyl ester or N-acetylcysteine (NAC), but not methionine, resulted in a significant increase in intracellular GSH in both cell types. Further, pretreatment of the cells with glutathione ethyl ester or NAC prevented cytotoxicity with exposure to 15 microM Thimerosal. Although Thimerosal has been recently removed from most children’s vaccines, it is still present in flu vaccines given to pregnant women, the elderly, and to children in developing countries. The potential protective effect of GSH or NAC against mercury toxicity warrants further research as possible adjunct therapy to individuals still receiving Thimerosal-containing vaccinations.

A study conducted by the University of Texas Health Science Centre by the Department of Family and Community Medicine determined that for each 1,000 Ib of environmentally released mercury, there was a 43% increase in the rate of special education services and a 61% increase in the rate of autism. Researchers emphasized that further research was needed regarding the association between environmentally released mercury and developmental disorders such as autism.

US National Library of Medicine
National Institutes of Health – 2006

A study published in the International Journal of Toxicology determined that in light of the biological plausibility of mercury’s role in neurodevelopment disorders, the present study provides further insight into one possible mechanism by which early mercury exposures could increase the risk of autism.

US National Library of Medicine
National Institutes of Health – 2003

Abstract
Reported rates of autism have increased sharply in the United States and the United Kingdom. One possible factor underlying these increases is increased exposure to mercury through thimerosal-containing vaccines, but vaccine exposures need to be evaluated in the context of cumulative exposures during gestation and early infancy. Differential rates of postnatal mercury elimination may explain why similar gestational and infant exposures produce variable neurological effects. First baby haircut samples were obtained from 94 children diagnosed with autism using Diagnostic and Statistical Manual of Mental Disorders, 4th edition (DSM IV) criteria and 45 age- and gender-matched controls. Information on diet, dental amalgam fillings, vaccine history, Rho D immunoglobulin administration, and autism symptom severity was collected through a maternal survey questionnaire and clinical observation. Hair mercury levels in the autistic group were 0.47 ppm versus 3.63 ppm in controls, a significant difference. The mothers in the autistic group had significantly higher levels of mercury exposure through Rho D immunoglobulin injections and amalgam fillings than control mothers. Within the autistic group, hair mercury levels varied significantly across mildly, moderately, and severely autistic children, with mean group levels of 0.79, 0.46, and 0.21 ppm, respectively. Hair mercury levels among controls were significantly correlated with the number of the mothers’ amalgam fillings and their fish consumption as well as exposure to mercury through childhood vaccines, correlations that were absent in the autistic group. Hair excretion patterns among autistic infants were significantly reduced relative to control. These data cast doubt on the efficacy of traditional hair analysis as a measure of total mercury exposure in a subset of the population. In light of the biological plausibility of mercury’s role in neurodevelopmental disorders, the present study provides further insight into one possible mechanism by which early mercury exposures could increase the risk of autism.

VAXXED TV – Vaxxed versus unvaccinated in my family

I was extremely pro vaccine

My daughter is injured for life by the flu vaccine

I will not vaccinate my children

5 members of my family are vaccine injured

How to accept Jesus Christ as your personal Saviour

1 Corinthians 15 Authorized (King James) Version (AKJV)
1 Moreover, brethren, I declare unto you the gospel which I preached unto you, which also ye have received, and wherein ye stand;
2 by which also ye are saved, if ye keep in memory what I preached unto you, unless ye have believed in vain.
3 For I delivered unto you first of all that which I also received, how that Christ died for our sins according to the scriptures;
4 and that he was buried, and that he rose again the third day according to the scriptures:

Hebrews 6 Authorized (King James) Version (AKJV)
1 Therefore leaving the principles of the doctrine of Christ, let us go on unto perfection; not laying again the foundation of repentance from dead works, and of faith toward God,
2 of the doctrine of baptisms, and of laying on of hands, and of resurrection of the dead, and of eternal judgment.
3 And this will we do, if God permit.
4 For it is impossible for those who were once enlightened, and have tasted of the heavenly gift, and were made partakers of the Holy Ghost,
5 and have tasted the good word of God, and the powers of the world to come,
6 if they shall fall away, to renew them again unto repentance; seeing they crucify to themselves the Son of God afresh, and put him to an open shame.
7 For the earth which drinketh in the rain that cometh oft upon it, and bringeth forth herbs meet for them by whom it is dressed, receiveth blessing from God:
8 but that which beareth thorns and briers is rejected, and is nigh unto cursing; whose end is to be burned.

- 6 15 53 : ? A about After AKJV An and Are As at Authorized Autism be biblegateway by Children Christ Corinthians David DEATH Documentary Dr E for from Full Hagin Health Hell His How injury Is Isaiah It James JESUS just Kenneth King Music New News Not of old on one PRAYING RT Spiritual study testimony that The this to Vaccination vaccine vaccines VAXXED Version Video What Why With World You Your în
the news network
Blog at WordPress.com.
Loading Comments...